Should You Trade Your Lederhosen for a Kilt?

Marketing ethnicity/admixture as the primary reason to take an autosomal DNA test is, frankly, a bit disingenuous at best; at worst, it might be interpreted by some as deceptive.

Q: My AncestryDNA test results came back, and they don't make much sense compared to our family history. My mother's father was Italian. His grandfather came to America from Italy, but I'm not showing anything at all that looks like that side of the family in my results. Should I take another test at a different company?

A: Thanks for the question. You're touching on a matter that is of concern to me, one that I believe is the primary downside to the marketing tack that AncestryDNA employed, that all others had to follow or see their market shares get eaten alive, and for which serious genealogists are paying the price. Marketing ethnicity/admixture as the primary reason to take an autosomal DNA test is, frankly, a bit disingenuous at best; at worst, it might be interpreted by some as deceptive. The whole "traded my lederhosen for a kilt" nonsense. Ancestry has made a lot of money targeting Heinz 57 melting-pot America, but I believe the message makes the idea of DNA testing uninteresting—even off-putting—to whole groups of people. The superficial sell-line implies that's all DNA testing is good for: ethnicity; lederhosen or a kilt; a Nigerian gele or a Ghananian duku.

The repercussive results are several. One is that we see volumes of AncestryDNA matches who never respond to communications. They didn't take the DNA test for genealogy, never created a family tree at Ancestry.com, and have no interest in expending energy on research or emailing potential new cousins. Again, I'm not singling out Ancestry in this regard. If someone's only interest is a chart that shows a supposed break-down of countries of origin, so be it. Every company that sells DNA testing for genealogical purposes advertises and offers the same types of charts.

Second is that we continue to see a disproportionately low percentage of test-takers from other continents. Almost all of the 325 million people in the United States know that their ancestors arrived fairly recently, the 17th century or later, and that the population grew from ethnicities and cultures intermarrying. We're mutts, and we're proud of it. But it's this background against which the "lederhosen or kilt" advertising trope works. For an Icelander whose family, as far back as memory goes, has always lived within 100 miles of Reykjavík, not so much. That Icelander knows precisely where his ancestors lived 500 years ago; he doesn't need to buy a pie chart.

The third result is the most insidious. For autosomal DNA, there is in fact little population genetic science being applied. At least as far as we know:

[There are] meager details on the breadth (geographic range of populations) and depth (number of individuals from each geographic region) of the reference populations being used to infer ancestry. Given the eagerness with which some prominent consumer genetic testing companies happily purvey ads that egregiously and unscientifically conflate genes with culture, such unexpected modesty is by design, not accident. What those reference sets actually entail also remain a closely guarded secret. After all, they're the be-all and end-all of realizing just how difficult it is to infer one's ancestry from DNA tests and just how tenuous such conjectures actually are.
—Tirumalai Kamala, Ph.D., Immunology, Mycobacteriology
Quora, 9 May 2018

The offshoot is that DNA testing for genealogy is experiencing a backlash of inaccuracy accusations when, in fact, the inaccuracies don't stem from evaluations of segment matching for genealogy at all. But if the vast majority of 10 million autosomal DNA test takers cares only about where their ethnic roots lie, they never see, know of, or care about the science of recombinative genetics that lets us verify that two second cousins do, in fact, descend from the same great-grandparents. Testing atDNA for genealogy is getting a bad rap. 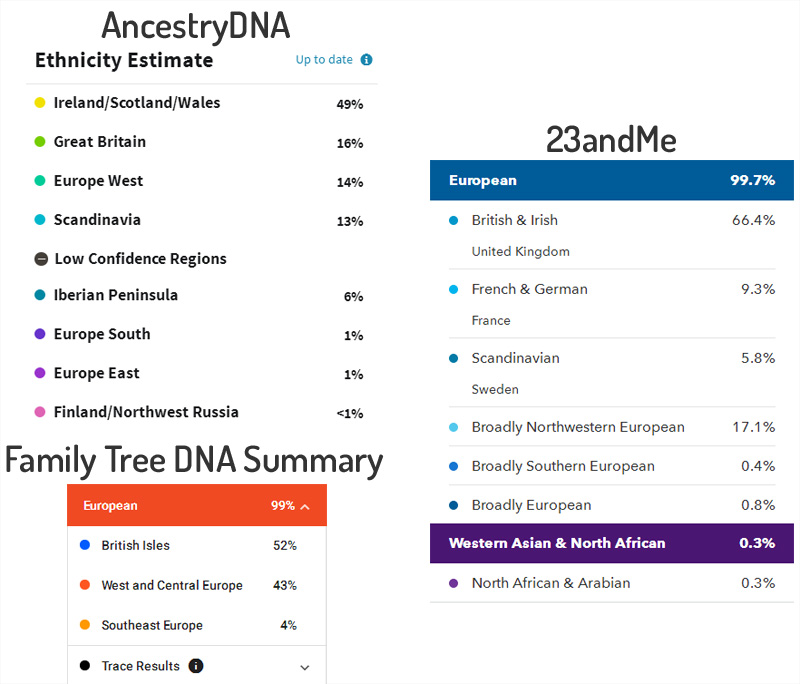 Admixture summary results, captured today from AncestryDNA, Family Tree DNA, and 23andMe, all of which are based on the identical set of raw data

I hesitate to link to this article by Kristen Brown at Gizmodo, but since its appearance last January the article has been viewed almost a million times and has been quoted by other sites—even sites like Forbes magazine—almost 1,000 times as an example of how DNA testing is inaccurate: "How DNA Testing Botched My Family's Heritage, and Probably Yours, Too." In truth, Kristen's article is well-written and well-researched. Unfortunately, like the heavy-handed advertising of ethnicity testing that she questions, the title of her own article is sensationalism and most readers don't actually, well, read the whole article, only the headline. And genealogical matching is never really mentioned in the article; its entire focus is ethnic background testing.

Do a search on YouTube for "DNA test." All 20 of the top 20 results will be about ethnicity results...and typically about how the results make no sense to the test taker or, my favorite, the absolute shock displayed by fraternal (dizygotic) twins when their ancestry DNA reports look different. Many of those YouTube videos tout the inaccuracy of DNA testing because, "I'm 2% Native American but my sister shows as being only 0.5%."

Debbie Cruwys Kennett, the respected genetic genealogist, wrote an illuminative blog post on this subject in 2015, titled "Comparing admixture results from AncestryDNA, 23andMe and Family Tree DNA." It's a good read; I highly recommend it. A large portion of our ancestors in the United States immigrated here from the British Isles. Debbie is very much English, and all her known ancestors within 500 years are from the British Isles. She accurately knows the birthplaces of 24 of her 32 3g-grandparents. The data sources and genotyping algorithms used by the testing companies to report ethnicity change over time (at AncestryDNA, for example, my own results have gone from 6% Scandinavian to 13% sometime in the past few months), but Debbie's article provides a good insight into what we've seen reported for those with origins in the British Isles.

Mid-article, Debbie offers a summary that I believe is better to close this post than any I could write myself:

Admixture tests really need to be used for entertainment purposes only at the present time, and the results should be taken with a very large pinch of salt. However, the tests can sometimes provide useful insights. Generally it is possible to distinguish between populations at the continental level (eg Asian, African and European) provided you're from a population that is not close to a continental border. Admixture from endogamous populations such as Ashkenazi Jews and Finns can also be detected with reasonable confidence. However, it is not possible to distinguish between populations within individual European countries and it may never be possible to do so because our ancestry is so complicated.
—Debbie Cruwys Kennett

Ethnicity/admixture reporting from our atDNA tests isn't wholly inaccurate, but certainly isn't wholly accurate, either. Treating it as for-entertainment-only will put it in the proper perspective, and may well prevent anguish and distress when family members see the reports and, expecting a healthy dose of Italian heritage, find none.

A peculiar coincidence? The number of ancestors contributing an X-chromosome at each generation follows the Fibonacci sequence, e.g., 1, 2, 3, 5, 8, 13, 21, 34, and so on. Males start with one xDNA contributor and females with two, then proceed with the sequence from there. The mathematical expression is xn = xn-1 + xn-2. The shapes of hurricanes and even spiral galaxies also follow the Fibonacci sequence.