The first five months of 2018 we went from 12 million direct-to-consumer DNA testing kits sold to about 17 million, an average of 1 million new kits per month. The extrapolated growth trend may slow, but it's still within reason that we might see 10 million tests sold through the course of 2018.

New data are in, and business is positively booming. Antonio Regalado, Senior Editor for the MIT Technology Review, has been keeping tabs on testing trends since at least 2016, and he posted this updated chart August 6.

These numbers aren't yet affected by GDPR because they run through the month of May; GDPR went into effect May 25. The Golden State Killer genetic genealogy brouhaha surfaced last April, so the trend might also be blunted somewhat by new privacy concerns. Time will tell.

At the beginning of 2018 we were indicating that about 12 million direct-to-consumer DNA tests had been sold, up from about 5 million as of January 2017, a 140% increase. As an averaged trend, we were selling about 583,000 test kits each month. I may not be a fan of the kilt or lederhosen "ethnicity" advertising, but it obviously works.

The first part of 2018 blows that performance out of the water. We went from 12 million kits to about 17 million, or an average of right at 1 million kits sold per month. I personally do expect the extrapolated growth trend to slow, but it's still within reason that we might see 10 million tests sold through the course of 2018. If that's the case, there would be as many tests sold in 2018 as there were in total from the opening of Family Tree DNA all the way through mid-year 2017!

The other thing the chart illustrates is just how rapidly the catalogs of data are accumulating. Just five years ago, in 2013, the numbers are barely a blip on the chart. Makes those of us who have been around genetic genealogy for a decade-and-a-half feel positively ancient. Speaking of ancient...

I have no source for numbers, but we're seeing a not dissimilar trend in peer-reviewed scientific studies of anthropology and population genetics. Huge technological changes—both hardware and software—have been going on in the background at companies like Illumina that make HiSeq sequencing of genomic data from small, ancient, and degraded samples possible, and at lower costs to institutions and universities than ever. David Reich, author of the excellent new book Who We Are and How We Got Here: Ancient DNA and the New Science of the Human Past, estimates that since the early 2000s the cost of analyzing ancient genomes has come down over 10,000-fold.

There is always a significant time lag from study conception and proposal to peer-reviewed publishing, but we began to see important new work start coming in around 2013 and 2014, and the rate of publication has been steadily escalating, so much so that I now have Google Alerts set to search for new pre-prints and papers on a daily basis to help me keep up. Some of these can't be included via the news aggregator service for The Tribune, but some, general-interest papers do find their way to that daily newspaper.

Back on the consumer homefront, Leah Larkin (fellow Texan and a blogger to follow at http://thednageek.com/blog) also monitors genetic genealogy sales trends. In her running information about DNA testing where she tracks current pricing, processing times, and market shares, she posted this chart showing estimated kits sold (and GEDmatch accounts) by company from the end of December 2012 through last April: 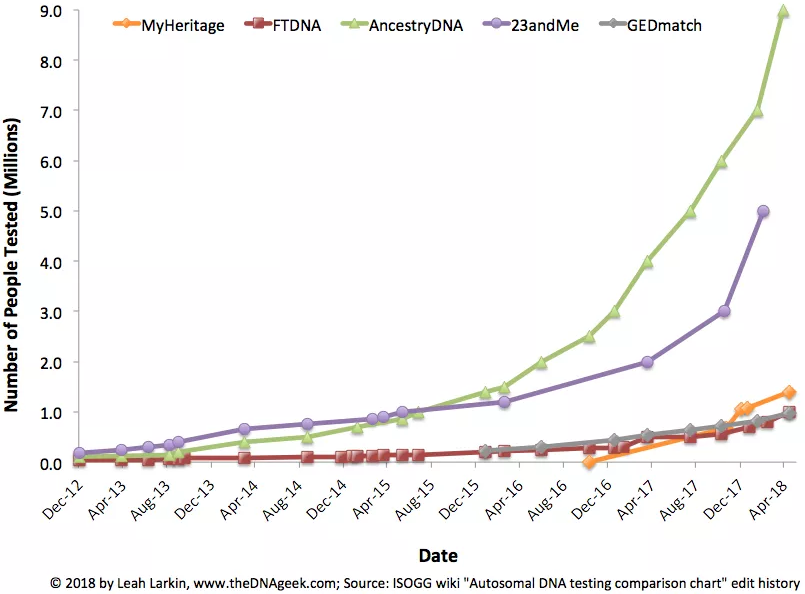 I sincerely hope we see additional players added to that graph in the near future.

Speaking of additional players, I want to take just a moment to call your attention to news that keeps popping up about a recent genealogy services market study titled, "2018-2025 Genealogy Products and Services Report on Global and United States Market, Status and Forecast, by Players, Types and Applications."

Sounds intriguing, doesn't it? Was to me. Proved to be not so dazzling. You can read my opinions at this article: "A Recent 2018-2025 Genealogy Market Study: Caveat Emptor."

In July 2014, Hugh Clayton Lowther, the eighth Earl of Lonsdale, resolved to sell Blencathra mountain, and with it the title Lord of the Manor of Threlkeld. Public pressure not to make these publicly accessible lands private won out, and the sale never went forward.

"Brevity, especially when it comes to something as operationally complex as the interpretation of autosomal DNA, comes at the expense of accuracy. I prefer accuracy."